A Future With Hope

With unflinching honesty, Armato discusses his challenges amid the desire to live a “normal” life. Often, people look at a chronic diagnosis one of two ways: as an excuse to give up, or with denial. Armato argues that neither is healthy. Instead, he has embraced his disease and works diligently to keep his health under control. Only then, he knows, can he do all of the other things he wants to do. He played sports throughout school, received a graduate degree in college, and now leads a demanding career and owns a horse ranch. Interspersed with excerpts from his wife and mother – his two main support staff – this book is a positive and uplifting story of what can go right when the rest of the medical world is telling you what can go wrong. A Future with Hope was recently named an Amazon Bestselling book in 19 categories including: #1 Diabetes #1 Personal Health #1 Health and Nutrition for Parents #1 Parenting #1 Parenting & Relationships #1 Medical Diseases #1 Public Health #1 Healthy Living #1 Medical eBooks #1 Medical Nutrition #1 Alternative Medicine Healing #1 Alternative Medicine #1 Eating Disorders and Body Image Self Help #1 Science and Math #1 Medical Administration & Policy #1 Special Topics in Medicine #1 Biographies of Social Activists #1 Biographies about Notable People #1 Biographies & Memoirs
Posted by Sheila at 7:14 PM 0 comments

For over 200 years the immortal creature, Adam Frankenstein, has roamed the earth looking to earn a soul and his right to die. Now, a U.S. Marshal in Houston, Texas he wakes in the middle of nowhere, near death. As the Grim Reaper reaches out to grant Adam's wish to end his immortal journey Adam must refuse. The only love he has ever known is his immortal dog, Bella. She is missing. Adam knows she's been taken by evil men who run a dog fighting ring. His worry isn't that Bella would be killed, but that it would be discovered that she cannot die, no matter what they do to her. Adam's partner, U.S. Marshal Rebecca Hughes, is his moral compass, his touchstone and now, the keeper of his secret. Adam and Rebecca work together to find Bella before she's forced to into the ring. Before it's discovered that she can't be killed. Adam Frankenstein: Dog Fight has some mature themes and profanity.
Posted by Sheila at 4:22 PM 0 comments

A truly captivating tale and fascinating journey that describes how all of us can transform a life without direction into one full of passion, determination, drive and hard work. When Mark finds the ocean, marine biology, conservation and particularly sharks he is finally motivated, has purpose, a goal. But will a passion be enough to mask the pain and mistakes of the past and keep the demons at bay?

Then in September 2017 hurricane Irma strikes and reaches beyond the day and to his very core. In an attempt to answer a question and to understand himself and the past he begins to write, but at what cost.
Follow Mark on Amazon at - https://www.amazon.com/Mark-R-Wilson/...
Posted by Sheila at 1:59 PM 1 comments

A Journey Toward Perfection by Helen Kamenos Book Trailer

Two thousand years ago, a fire humbly and meekly exploded into our reality. That fire was Christ. Take the Journey Toward Perfection and be transformed. You will undergo a metamorphosis. You will become the butterfly that God always meant for you to be. Find out more at https://www.facebook.com/AJourneyTowardPerfection/
Posted by Sheila at 8:17 AM 4 comments

Exposing a scandal at the VA hospital was Dr. Cooper Logan’s responsibility, and his first mistake.  The world was background noise as Cooper worked to save lives.  He’d won his scholarship wrestling and keeping Death off-balance was his new passion.  But, politics wasn’t what Cooper was interested in and learning them the hard way cost him his residency.  But when the nurse who had betrayed him turns up dead Cooper’s life begins to unravel.  And the danger he faced now had Death staring him in the face.
With a realistic, heart-pounding medical thriller you can expect some intense scenes, but award winning author Dr. Thomas Jay Berger ups the stakes with behind-the-scenes hospital politics, questionable ethics, racism in hospitals and other issues that only someone who has really experienced this kind of life could give.  We caught up with Dr. Berger to talk to him about some of the hard stuff found in his novel Dueling in Death’s Backyard. 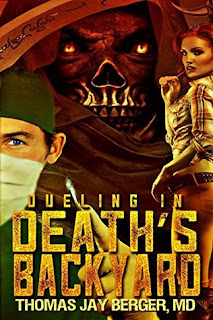 Without giving too much away, we find that an ICU nurse has become quite powerful because of who her protector is.  How realistic is this?  Do nurses have that much power?

Dr. Berger:      The Birmingham VA ICU in Dueling was a real problem.  Just as in my novel, patients were occasionally found dead, with normal vital signs recorded on their charts for many hours after their hearts had to have stopped beating.  To my knowledge, no nurse was ever disciplined for this.  VA positions are civil service protected and it is virtually impossible to fire anyone.  I should add that there are also excellent VA hospitals, like the one in Asheville, North Carolina, which is associated with Duke.  I served there as Chief of Surgery and an Associate Consulting Professor of Surgery on the Duke faculty.
Even in non-VA hospitals, in these days of political correctness, a nurse can kill a patient and if the doctor involves uses intemperate language towards the nurse, he will be in trouble and the death will very likely be whitewashed.  If the nurse is protected by a powerful staff doctor, for whatever reason, this becomes even more likely.
Don’t get me wrong.  I have tremendous respect for the vast majority of nurses.  They do an extremely difficult job very well for way too little pay.  Dueling describes several superb nurses, some of them based on actual people with whom I have worked, and only one really bad nurse.  From my work as a medical expert, I can tell you that bad doctors are a lot bigger problem today than bad nurses.

Your characters are set in the deep South and there are some uncomfortable moments of prejudice depicted in some scenes.  Why include that? Why is that important to the story?

Dr. Berger:      There was really no choice about including that.  That’s the way Birmingham, Alabama, was in the 1970s.  That’s how people talked and how many of them thought.  Cooper and I both experienced culture shock in Birmingham and that increased the stress of our residencies.   Cooper reflects my feelings about the deep south when I, like Cooper, had only been there for two years.  By the time I completed my seventh year of surgical training, I had come to love the South.  In fact, I now consider myself a Yankee by birth but a rebel by choice.
There is no more prejudice in the South today than there is in the North, and even back in the seventies everyone who used racist language was not necessarily a racist.  That may seem hard to understand but, if you read the book, you will get it.  In Dueling, I tried to present Southerners accurately as including the best and worst of humanity – just like Northerners or any other group of folks.

Have you had any backlash from the medical community about how you portray the hospital and people who work there?

Dr. Berger:      Dr. Kirklin’s son is also a cardiac surgeon and the current chief of the Birmingham program.  He loved my novel and especially the way in which I so accurately described his father and what it was like to work under him.  I have also had rave reviews from many other physicians and nurses.
My problems with the medical community relate to my activities as an expert witness not as a writer.  I have told the truth in court and depositions about many patients injured by the negligence or incompetence of their doctors.  The so-called malpractice crisis is not a crisis of frivolous litigation, as it is often portrayed.  It is a crisis of bad medicine.  Rather than working to punish or re-educate the few bad doctors, some powerful medical organizations have circled the wagons around them and attacked those who, like myself, stand up for the patients they have harmed.  This is the old conspiracy of silence back again, stronger and more organized than ever.
The Society of Thoracic Surgeons, for example, has set up kangaroo courts which attack experts who have told the truth about patients harmed by its members.  This is not unlike the Mafia which also goes after those who testify against its members.  At least the Mafia is honest about what it is doing and why.
Why a medical thriller as opposed to literary fiction or a medical book?

Dr. Berger:      Actually I have written a number of scientific articles as well as a chapter in a book about medical malpractice litigation.  Since retiring from active practice in 1998, due to problems with my vision, I have served as an expert in hundreds of medical cases.  This work often involves writing detailed reports, which must be written in layman’s language.  These reports helped prepare me to describe complex surgical procedures dramatically in a way that any reader can understand and enjoy.  The way historical fiction can make a battle come alive as if you were there, my OR scenes make surgery come alive as if you were the surgeon.
Writing fiction is the easiest kind of writing because you are all-powerful.  You can make anything happen in the world you create - anything.  Of course, that also means that you must choose what you want to happen out of a literally infinite number of options.  That’s why fiction is also the hardest kind of writing.
When writing fiction, I can sit down and work for an hour, and, when I’m done, I’ll look at the clock and find that six hours have passed.  It’s the ultimate high.
Why medical thrillers?  I guess it’s just because one must write about what one knows.

What made you want to be an author?

Dr. Berger:      When I was about 8 years old, my father gave me a Tarzan book.  I have been reading ever since and the relationship between reader and author has always seemed magical to me.  If I write something that makes a reader laugh or cry, or love a character I created, that is just about the coolest thing I can imagine.  That is why I love answering questions about or discussing my novel.  I answer every email or Face Book query personally and, when I have a twitter account, I will gladly tweet back to any reader who tweets me.

Michael and his friends try to recruit Hatch’s Electric Youth to their side as the thrilling action continues in this electrifying sixth installment of the New York Times bestselling series! Find out more at http://www.Richardpaulevans.com Young adult fantasy, adventure

Explore captivating stories of music changing lives around the world. Stories of Music, a multimedia anthology, features nonfiction, poetry, original music, photography, and video by 40+ authors and artists from 11 countries. A portion of book proceeds will be donated to nonprofit organizations Hungry for Music and Music and Memory. Find out more at https://StoriesOfMusic.Com/

A Sampling of COS Book Trailers

COS Productions Presents some of our favorite trailers!

The Phoenix Decree by Anna Albergucci (featured by USA Today)

The Kraken Project by Douglas Preston

Deadlands Ghostwalkers by Jonathan Maberry
Posted by Sheila at 8:08 AM 0 comments

Book trailers are like movie trailers, but for books and COS Productions created the now popular market for book trailers. Here you will find fun and insightful information about your favorite author, industry tips, book reviews and more!

Come network with us!

Check out the Reader's Entertainment TV Blog for the latest trailers and book entertainment news!